Racing Round the Indian Sub-Continent

I have recently returned home after spending 6 months travelling the Indian sub-continent. The trip was one of the best I’ve been on and was full of awesome rivers, people, food and cultural experiences. One of the highlights was competing in three events – the Malabar River Festival, MeghaKayakFest and the Himalayan Whitewater Challenge. All the events had different challenges but were equally fun and I would highly recommend each one to anyone looking for an exciting addition to their kayaking holiday. Here’s a brief write up of my experiences at each one.

I flew down to Kerala after an incredible couple of weeks of multiday kayaking in Ladakh. I was due to meet some friends in Cochin airport who were arriving from the UK. About a week before my flight problems in Kashmir kicked off and flights were being cancelled. The internet in Ladakh was also cut off, resulting in a tense few days being unsure if I would even make it to Kerala and totally unable to contact anyone. Thankfully everything went to plan (complete with a few hours sleeping with my kayak on the street outside the airport because I was too cheap to pay for a hotel) and I arrived in Kerala ready to defend my 2015 Rapid Rani title. I was also determined to qualify for the final this year – held on the technical Fire Alarm rapid on the Middle Iruvanji, I would need to place in the top 10 after the slalom, boater cross and down-river heats. 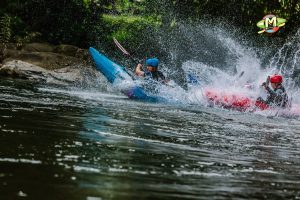 Flying off the start ramp of the boater cross – Mark Swaroop

The monsoon was light in Kerala this year, giving us ample opportunity to practice the Malabar Express rapid ready for the down-river race. After a week of fun we were soon parading down the streets of Kodencherry and dancing to a band of drummers; this signified the traditional, if surreal, opening ceremony of the festival. This year there were 5 female competitors which was an exciting increase from 2! During the races the speed and manoeuvrability of my 9R was a real asset, particularly in the slalom where I put down the 2nd fastest time of the day in the heats. I comfortably took the win in the female category for each event and my strong performance also meant I qualified for the final in 8th position. Unfortunately, I got pushed into a boulder halfway down the final course and lost valuable seconds upside-down, but I was still buzzing from the whole experience.

Check out the awesome highlights video from the festival by Neil Productions:

On a trip to Meghalaya last year I fell in love with the beauty of the landscape and the friendliness of the people. The 2016 season fitted perfectly into my travel plans, with the added bonus of coinciding with the first ever MeghaKayakFest. The event would be held on the mighty Umtrew river, my only memories of which were of being very jetlagged and nervous, so I was keen to jump back on and familiarise myself with the section. It was great to be on the water in Meghalaya and see how much my boating and confidence had improved whilst travelling. 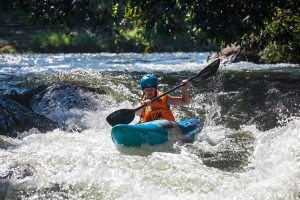 The expert category included a down-river time trial and “expression session” on the last rapid of the lower Umtrew section. I found myself saying for the 2nd time in only 3 months that this was the hardest course I’d ever raced! I was particularly intimidated by the idea of the expression session on such a challenging rapid, but the atmosphere was incredible and all the other competitors were very encouraging. 2 days later there was an intermediate competition alongside the expert slalom and boater cross races, held on the rapid next to the Shillong Whitewater Village (run by the lovely Vincent family who did the incredible job of housing and feeding 40 hungry kayakers throughout the whole festival!). I was the only female competitor in the expert category but it was great to see a decent number of both local and foreign female intermediates. 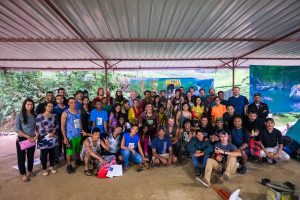 Here’s the awesome drone footage by Joe Rea-Dickens of my run from the expression session. (Also, make sure you keep your eyes peeled for the new Meghalaya kayaking guidebook which is going to be published and available later this year!)

This event was a very pleasant surprise during my Nepal trip. Some friends recommended it whilst we were planning to head to the Karnali. Unsure how long the trip would take us and not keen to rush, we decided to enter if we made it back in time. The Karnali was probably my favourite adventure in Nepal – 2 days of fun big volume followed by 2 days of super scenic flat water, thriving with wildlife. After recovering from our long, uncomfortable bus journey back to Pokhara we even had time for an afternoon of practice laps on the very technical slalom course before the festival started.

Super excited to be on the Karnali – Nicole Portheim 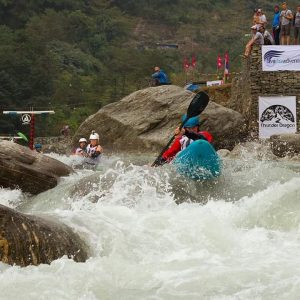 I had such a great time at all 3 events and want to say a massive thank you to everyone who was involved in the organisation and smooth running of the races.