When I arrived in Nepal I was in a very weird place. I didn’t want to go kayaking – a feeling I have never experienced before and one I was not sure how to deal with. Instead we headed to Chitwan National Park to go wildlife watching, which was definitely a highlight! At one point during our two-day wildlife walk we were encouraged by our adventurous guides to wade waist deep across the crocodile infested river so that we could get face-to-face with a rhino on the other side. As we crept closer, we were not as subtle as we hoped and the rhino turned angrily towards us. This caused a bit of panic amongst our guides, who warned us that if the rhino charged we should jump back in the river! 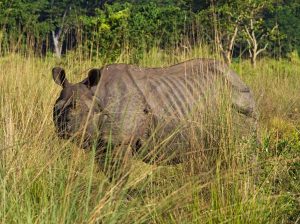 If the rhino charges jump in the river – James Pattison

After a few days of rhinos, elephants, crocodiles, boar and deer we travelled in a crammed local bus back to Kathmandu to meet the Irish contingent and headed to the Balephi for a couple of days of chilled kayaking. I was still not feeling great in a boat. Although I managed get on with it, I didn’t feel 100% for the whole trip, and I regretfully took my anger with the world out on a couple of my friends. 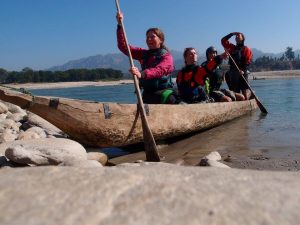 Checking out the local transport on the Karnali – Nicole Portheim

Despite this, there were some awesome highlights to my trip – partying at Sarangkot for Jamie’s birthday, 4 days on the stunning Karnali river with Sue, Nicole and Rowan, competing in the Himalayan Whitewater Challenge on the Seti (which you can read about here) and the free paraglide I won during the event. Nepal is such a beautiful country and hopefully at some point in the future I will be back to paddle to Thuli Bheri! 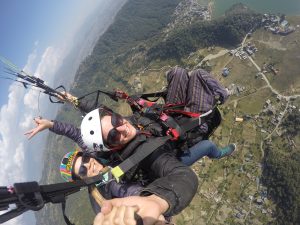