This year, for the first time since I can remember, the National Student Rodeo and Galway Fest were organised to be on different weekends, which meant I had no excuse to not attend both. Galway Fest’s reputation precedes itself, with a rumour of one year someone getting so wasted they drank a candle! I have my own reputation at NSR for winning the party and last year I ended the weekend with my arm in a sling. I was a bit scared for these two weekends to be back-to-back, especially so close to my next adventure, so set myself a solid aim of no hospital visits which I very thankfully managed to keep!

A few heavy storms in the run up to NSR meant that the water level of the Trent was too high for the course to be running. Although this was a real blow to the competition side of things, the organisers did a fantastic job of sorting flat water events and the party was as epic as ever. The Pyranha stand was packed out for the whole weekend with people demoing boats and vying for a chance at the Pyranha prize – bringing us food and pot plants to aid in our fight against the zombies. Portsmouth University were the very worthy winners after filling the van with flowers, wearing Pyranha stickers on their faces and keeping us entertained on and off the water. 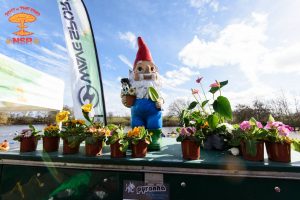 A beautiful array of flowers and even a garden gnome donated for the Pyranha prize! – P.Y. Photographic

During the film competition, I helped present a cheque for £5000 to Kingfisher Canoe Club on behalf of River Legacy. The money will be used towards a new club house for KCC, who have been evicted from their current premises. It’s awesome to see the bar proceeds from NSR and other events going towards such a good cause. You can read more about the donation here: http://river-legacy.org.uk/donationkcc/ 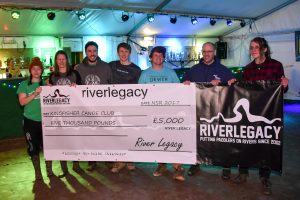 After a couple of days of rest and recuperation, I was on a plane to Dublin. We were blessed all weekend with glorious sunshine, which I understand is a rare occurrence on the west coast of Ireland. The event ran impressively smoothly given that there were 200 competitors, 6 events and the added time pressure of the incoming tide. On the Friday night we watched Callum and James talk about their trip to Afghanistan, which sounded like a fascinating cultural experience with the added bonus of fun whitewater. It definitely sparked my desire to explore more of the world.

The first event on the Saturday was the time trial down a grade 2/3 section of the Boluisce river. We just about sneaked a practice run in before the race briefing so I at least had some idea of where to go! My run felt smooth and fast and I was delighted to put down a time of 5.58 minutes, firmly placing as top female and 15th overall. The team race had the added amusement of a running start and finish, but by far the highlight of the weekend for me was the no-decks boater cross on Saturday afternoon. I ended up completely sunk, heading backwards down the final (and hardest) rapid, giggling all the way. 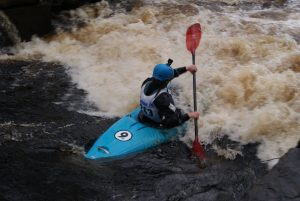 Last push through the final rapid on the timetrial – Paul Bradley

After a fun night out on Saturday and a slightly sore head, we headed to the Corrib river in the centre of Galway for the freestyle, mass slalom and boater cross competitions. The slalom involved racing down a tedious flat side channel before reaching the main river, collecting pegs from two eddys and sprinting to the finish line. I volunteered to hand out the pegs for the men’s expert race which was fairly hectic! 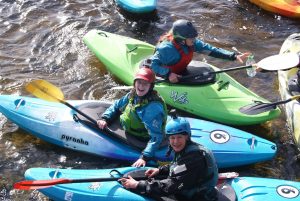 Over the weekend there were 19 women racing in the expert category and also a solid turn out for the intermediates. It was awesome to see so many ladies on the water competing but also encouraging each other and having a great time. I was very chuffed to come 2nd overall in such a strong ladies category. It was also pretty cool to be racing through the middle of Galway, increasing the exposure to the general public who were intrigued by the whole thing. Overall I loved being involved in the event and definitely will be back at some point (after a couple of years over the other side of the pond).

Good work and thanks to the organisers of both NSR and Galway Fest for putting on such successful events. Here’s my highlights video from Galway Fest: