I’ve been in Canada just over 2 months now and have been on the river pretty much every day. Despite a slightly rocky start not feeling particularly confident, the kayaking has been awesome and I’ve met some great people. Some of the highlights have been racing in the first 3 events of the Quebec Whitewater Series events – the Neilson race, the Rouge Challenge and the Kipawa Head 2 Head. Each one has been super fun and challenging in its own way. 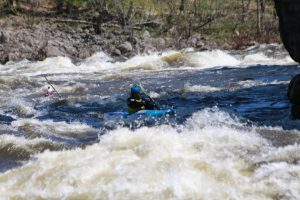 Great fun racing with Gen at the Rouge Challenge

The Neilson race started the series off with a bang! The river is 6 or 7mins of hard, unforgiving whitewater, finishing with the most challenging rapid. You race with a partner, which I find quite stressful as I am constantly worried about letting them down! The race nerves got to me and I ran the entire of the first rapid (Gros Yeux) on my face, which scratched my hands and my new paddles and left me a bit out of breath for the rest of the race. Despite this, it was still a lot of fun and Gen and I took the win in the women’s category. 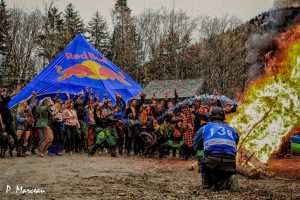 Excitement at surviving the Neilson race and ready for the party!

The next race was the Rouge Challenge. The Rouge is my local river for the summer so I had paddled it a lot, at varying water levels. It’s a different challenge to try to break the river down and look for the fastest lines, rather than the lines that are the most fun. Similar to the Neilson race, the race was in pairs so again I felt the pressure of not letting Gen down. Thankfully my 9R arrived a couple of days before the race so I had time to get it outfitted, remember how to paddle it and start to feel confident. 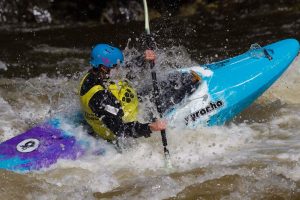 Super happy to be racing in my 9R

After a couple of warm up laps in the morning and a nice chilled lunch by the river, we were ready to start. The race nerves got to us on the first run; we both flipped and finished feeling a bit disappointed. After a break watching the other racers and a bit of a pep talk we were ready for the 2nd lap. I don’t think I could be happier with our performance. It wasn’t perfect and there’s definitely things I can improve on but we had good lines and kept paddling hard the whole time. We finished with a time of 2.15mins, 5s ahead of the 2nd place women and equalling the time of the 6th place men’s team.

The final for the race was a boater x, the only aim of which was to beat your partner to determine who would be ahead on the points table for the series. It’s not the best feeling to race with someone for the whole day and then against them at the end! Boater x is also not my favourite event but I managed to get ahead of the group and keep my lead for the whole race. The day was finished with an awesome party at New World Rafting, to make sure we were all in tip top condition for the freestyle competition on the Sunday. 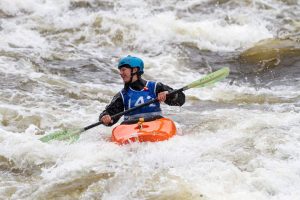 Best way to kill the hangover!

A couple of weeks ago was the Hollywood Head 2 Head on the Kipawa river. Having done no real research into the river or the event, I was very pleasantly surprised by the fun rapids and beautiful campsite (only slightly ruined by allllllllll of the bugs – I have been eaten alive). The race was Saturday afternoon, giving us time for a lap on the river and some practice race runs beforehand.

Similar to boater x, head 2 head is not a race format that I favour. I prefer to be competing only against the clock rather than against other people. However, when offered to race in the men’s category as well as the women’s to make up numbers, I jumped at the opportunity. The men’s and women’s races were alternated, so I had to race 4 times back-to-back which was super tiring! I was gutted that Gen, my partner from the last 2 races and main competition, hit herself in the face with her paddle in her last practice lap and was unable to compete.

The women’s final was a close one between Alex Maggs and myself – I got caught on the eddy line trying to charge to the finish banner and she almost got past me, but I just about managed to hold onto my lead. In the 2nd round of the men’s I was drawn against Fred Gendron, last year’s series winner. Knowing I couldn’t beat him on the main line, I decided to attempt the risky right-hand line which goes between two big holes. I’d tried it once in practice and just about managed to drag myself through. Unfortunately, it did not go so smoothly in the race and I ended up getting massively backlooped – at least I made the crowd happy! 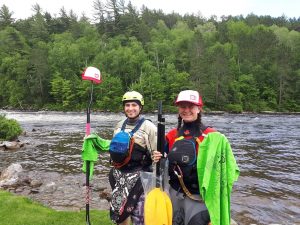 I am having a great time racing in Quebec. The series is a great idea and really well organised. It would be awesome to have something similar in the UK. I’m very excited for the final 2 events in August – Montreal Eau Vive and the 7 Sisters Slalom. Watch this space for a write up.